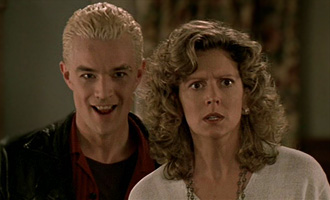 Yes, Joyce did just have hot chocolate with Spike.
"You're not friends. You'll never be friends. You'll be in love 'til it kills you both. You'll fight, and you'll shag, and you'll hate each other 'til it makes you quiver, but you'll never be "friends." Love isn't brains, children, it's blood. Blood screaming inside you to work its will. I may be love's bitch, but at least I'm man enough to admit it."
—Spike
Advertisement:

The SAT results are in. Buffy looks positively shaken; her SAT score is a whopping 1430. The gang thinks that these scores could change Buffy's future. Buffy admits that it feels weird, because she was never sure she'd even have a future. Cordy smiles hugely because they enable Buffy "to leave and never come back!" Everyone turns to look at her.

"...Well, I mean that in a positive way. Get out of Sunnydale — that's a good thing. What kind of moron would ever want to come back here?"

Cut to the "Welcome to Sunnydale" sign getting mowed down by a car (again). We all know who the moron in question is. A bottle of liquor shatters on the pavement, and then Spike tumbles out.

Xander and Willow are having second thoughts about going on a double-date; Willow is concerned that Oz and Cordelia will notice the sexual pull between her and Xander. Xander tells her that he wishes that they could just get rid of their feelings of lust.

Spike visits the magic shop during the daytime. We figure out that he means to curse Angel, and settles on leprosy as his preferred method. ("We don't carry leprosy.") Willow coincidentally enters with a shopping list. The storekeeper recognizes it as the ingredients for a love spell, but Willow explains that she wants the opposite effect. Once she leaves, Spike comes out of hiding and kills the shopkeeper, having decided that a love spell to make Drusilla love him again is an even better idea.

City Hall. Mayor Wilkins is playing golf in his office when his deputy alerts him to Spike's return. Wilkins agrees that they organize and send a "committee" to deal with the problem.

In the school chemistry lab, Willow is working on the anti-love spell while Xander expresses strong reservations about the idea. Spike shows up and clobbers Xander, then announces that he needs to borrow Willow for a while. He drags Willow and the unconscious Xander back to the factory, where he demands that Willow perform a love spell for him. Willow stalls by saying she needs a spellbook.

Back at school, the Scoobies find the chem lab torn up and Willow and Xander missing. Buffy starts to load up on weapons, but the phone rings; It's her mom. Buffy tries to beg off, but then hears Spike's voice in the background. "Hello, Joyce!"

Summers home. Joyce pours Spike some hot chocolate (!) as he relates his sob story. Angel comes strolling through the neighborhood. He spots the couple talking in the kitchen and immediately makes a run for the doorway, but is stopped by the invisible barrier. Joyce, still under the impression that Angel is evil, orders him to leave. Buffy arrives and spoils his fun, then, (finally) invites Angel in. Joyce is confused at this role reversal. Spike gloats he's got their friends, and they had better help Spike if they want to see Willow and Xander alive.

Spike whines about sobering up as he leads Angel and Buffy to the magic shop. The couple act smug over Spike's gin-soaked misery, but Spike says they're one to talk, pointing out that the last time he saw Buffy and Angel, they were fighting to the death; Now they're making "googly eyes" at each other. Buffy parrots that they're Just Friends, but Spike torpedoes that notion in one of the most famous speeches the show ever had.

Oz and Cordelia drive off to fetch Giles. Oz suddenly swerves around when he detects Willow's scent in the air ("a residual werewolf thing"). Back at the factory, Xander wakes up to find that he and Willow are locked in a basement. Deciding that the high probability of death is a mitigating factor, the pair of them start kissing and do we even remotely need to tell you who shows up at at moment? Cordelia looks sick and runs for the exit, but the stairs give way. Xander rushes over to see her lying face up on some rubble. She manages, "I fell." The camera pans down to show that she's been impaled on rebar.

As they leave with the needed supplies for Spike's spell, Buffy, Angel and Spike are surrounded by the "committee" of vampires sent by Wilkins. The three of them get herded back inside the magic shop, then barricade the windows, but it's no use. Lenny reaches Spike and laments that he's gone soft. Wrong thing to say, I'm guessing. Spike repeatedly hammers Lenny's head against a table before staking him. Buffy and Angel let fly some vials of holy water. Repulsed, the vamps flee. Spike's elated to have had a good fight. Buffy asks about the spell. Spike shrugs.

"Sod the spell. Your friends are at the factory."

Buffy gives him an "I can't believe I'm so dumb" look. Spike jauntily says that all he needs to get Dru back is to quit whining and to be the man he was. He strolls out.

Back at the factory, Xander kneels over Cordelia, rebar sticking through her torso, as she loses consciousness. Cut to a cemetery, where a funeral service is being performed. Buffy and Willow walk on by, chatting about how Cordelia survived the fall and is in the hospital. (Not cool, Mutant Enemy.) Willow whimpers that Oz is refusing to talk to her, and Buffy suggests time and groveling. Speaking of which: Xander, huge bouquet of flowers in hand, knocks on the door to Cordy's hospital room. "Stay away from me," comes the reply. Ice cold and totally right.

Buffy visits Angel, and tells him that they are not friends; she explains that she's not coming back, as he doesn't need her help anymore. Angel protests, and Buffy tells him that the only way they can see each other is if Angel can say that he doesn't love her, something he cannot do.

The next day, Spike drives off, feeling like a new man and singing "My Way".

"I'm going to do what I should have done in the first place: I'll find her, wherever she is, tie her up and torture her until she likes me again."