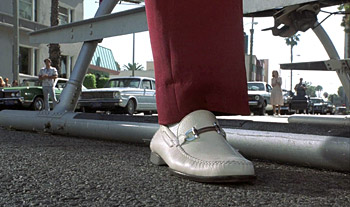 Introducing a character by showing the feet and either panning or cutting to the rest of the body, ending with the face. Evidently, shoe selection is a big element for characterization. Or the director is just into feet.

This trope is often used to introduce characters who are evil or sexy, or both. Someone may be crouching down or laying prone for some reason (perhaps injured) and a pair of shoes will step directly in front of them, creating unease. Or a number of people - maybe even a huge crowd - are waiting for someone to arrive, and that arrival is heralded by footsteps and then the appearance of feet. Either way, the camera will travel upward very slowly, building anxiety as the audience (whether in-universe or out) receives the full effect of being towered over by an intimidating figure. She's Got Legs may come into play, but not necessarily. The same can also be applied to Fearsome Foot.

Sometimes the trope is used for reasons other than villainy or sex appeal. A character's feet, for example, might be a clue to their personality. Extremely colourful shoes can indicate someone either mischievous or buffoonish, while bare feet might signal anything from a Noble Savage to a person determined to triumph despite poverty.

And sometimes the character's face is just so worth waiting for that the creators put off The Reveal until the last possible second. They might even cut back and forth to whoever is looking at this character to draw out the process even more. A Giant Foot of Stomping is, as you might expect introduced this way.

Not to be confused with Dynamic Entry, which sometimes also happens feet first.