Literature / One, Two, Buckle My Shoe 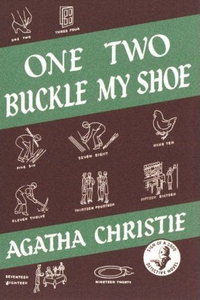 One, Two, Buckle My Shoe (distributed as Patriotic Murders and An Overdose of Death in the US) is a part of Agatha Christie's Hercule Poirot series first published in 1940.

Poirot visits his dentist for a regular check-up one day, and is later surprised by a report from his friend Chief Inspector Japp that the dentist, Henry Morley, had committed suicide some time after Poirot's departure. The man was not entangled in any form of financial or relationship troubles, nor did he seem particularly depressed on the day of his death. The only possible alternative of Morley's death is murder, but who could have killed him, and why? Among Morley's patients is Alistair Blunt, a major political figure whom many would love to see gone. Perhaps he's the intended target?

In 1992 it was adapted to TV for the 4th season of Poirot. Tropes unique to this adaptation are listed on the series page.