Anime / The Garden of Words 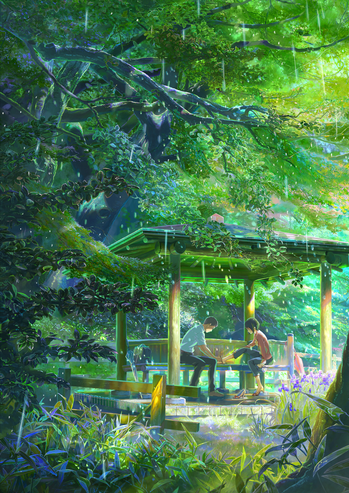 We have met, for each of us to walk forward.
Advertisement:

Released in May 2013, The Garden of Words is the fifth film Makoto Shinkai has directed. The film follows Takao Akizuki, a fifteen-year-old student aspiring to be a shoemaker. On rainy days, Takao skips his morning classes and spends his time in Shinjuku Gyoen, a Japanese-style garden. During one of his excursions, he encounters Yukari Yukino, a twenty-seven year old woman. As the two encounter each other more frequently, they gradually open up to one another and confide in one another their problems, finding comfort in the other's presence in spite of their age differences.

The Garden of Words marks a return to the style Shinkai employed in 5 Centimeters per Second, illustrating how factors such as age may contribute to separation and the loneliness that individuals may experience in their lives. The soundtrack is composed by Daisuke Kashiwa.

The Garden of Words provides examples of: