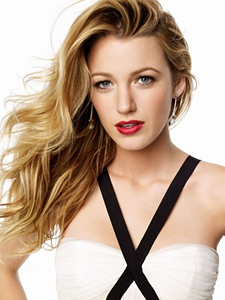 She got into acting for some very amusing reasons; her parents taught acting classes and didn't want to leave her with a babysitter, so they brought her along whenever they taught. She was initially not interested in pursuing it as a career, and her first role was only a bit part in a film called The Sandman (which was directed by her father). Apparently in her first audition, she simply walked in and handed them her headshot, not thinking she'd have to do anything else. The audition was for The Sisterhood of the Traveling Pants, and they decided she was perfect for the role they were casting.

Blake soon started appearing in various projects - usually playing an Everyone Loves Blondes character. She also became a media sensation when she was cast as the lead in The CW's flagship Teen Drama Gossip Girl. Playing the beautiful and wild Serena van der Woodsen, the show was a hit and lasted six seasons. Despite the fame it brought her, Blake has distanced herself from the show in recent years - calling some of the work "emotionally compromising".

Despite getting her start in roles that catered to her beauty, she sought to really earn her stripes as an actress. It started with getting very against-type parts in The Town (as a trashy alcoholic) and Hick (as a coke-sniffing con woman). The former won her acclaim, but the latter has been mostly forgotten.

Not to let that deter her, she struck gold when she was cast in The Age of Adaline. A planned Katherine Heigl vehicle, the film saw Blake playing an immortal woman who sees all her friends and family die as she never ages. Critics heaped praise on her, and they did likewise for the film The Shallows. Both were also modest box office successes, proving she could draw a crowd with more than just her beauty.

Her father is late actor Ernie Lively, who appeared with her in The Sisterhood of the Traveling Pants. She has one older full brother, Eric, and three older half-siblings from her mother's side, Lori, Jason, and Robyn, all of whom are also actors. In 2012, she married Ryan Reynolds, her costar in Green Lantern. They have three children.

Works associated with this actress: