Film / Meshes of the Afternoon 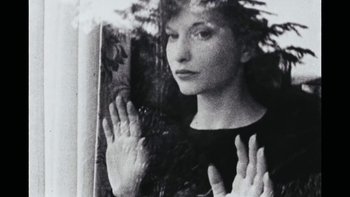 Meshes of the Afternoon is an experimental 1943 14-minute film directed by Maya Deren and her husband, Alexander Hammid, and written by Deren.

The film opens with a mysterious hand placing a rose on a driveway. A woman (Deren) sees the flower, picks it up, and takes it into her apartment. She falls asleep in a chair and appears to have a dream in which she chases after a mysterious hooded and cloaked figure with a mirror for a face. A succession of odd images continue to appear, with one motif focusing on a kitchen knife that changes into a key, then back into a knife, then back into a key. A second and a third woman, played by Deren, both appear, until there are three identical versions of the woman in the kitchen of the apartment. One version of the woman attacks another version of the woman with a knife. Then a man (Hammid) appears, and he seems harmless enough, but he moves just like the cloaked figure with the mirror face...