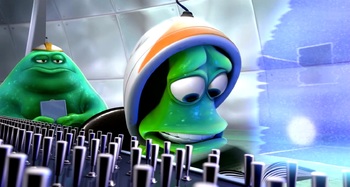 Lifted is a 2006 animated short film by Gary Rydstrom. It is one of the Pixar Shorts.

The setting is an isolated farmhouse in the dead of night. A Tractor Beam shoots through the window, picks up the farmer, and carries him to the window—until the floating farmer bonks into the windowsill. It turns out that the whole affair is a test for Stu, a young greenish blob of an alien, who is attempting to abduct his first Earthling. As his stern examiner Mr. B scribbles on his notepad, the young alien continues to bungle the abduction, and gets more and more flustered.

Played in theaters before Ratatouille.