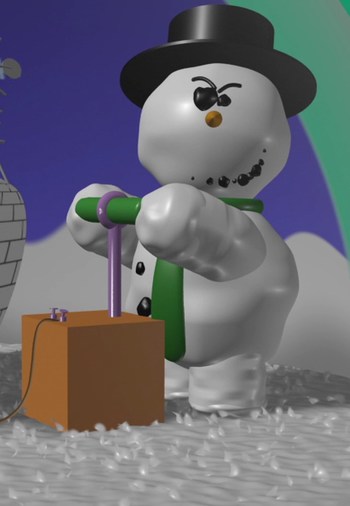 Knick Knack is a 1989 short film from Pixar, written and directed by John Lasseter.

On a bookshelf filled with vacation-themed souvenirs, a snowman named Knick (who is the cousin of Frosty the Snowman, according to the audio commentary), who resides in a Nome, Alaska snow globe, wants to reach a "Sunny Miami" knick knack that shows a pretty blonde girl in a blue bikini. Knick tries several unsuccessful methods to break out of the globe, culminating in detonating TNT explosives. None of these work, but the TNT causes the globe to fall over the shelf's edge. Knick notices an emergency exit in the base and frees himself just before he and the globe fall into a fishbowl. Here Knick sees a pretty mermaid souvenir from "Sunny Atlantis" and runs toward her, but before he can reach her, the globe settles to the bottom and traps him again.

Knick Knack's production is one of the most noted from Pixar's early days. The team all agreed to do something simpler that would not "drive us all crazy," according to producer Ralph Guggeinheim. When watching Who Framed Roger Rabbit during the production of Tin Toy, Lasseter became inspired to create a Chuck Jones-type of cartoon. Rather than to challenge the limitations of the computer as they had done in the previous shorts, the animators wanted to make a short based on geometric shapes instead, which was a strength of the computer. In a discussion with the group, Lasseter brought up famed Warner Bros. and MGM director Tex Avery, noting that his cartoons were wild and exuberant, yet not necessarily very complex.