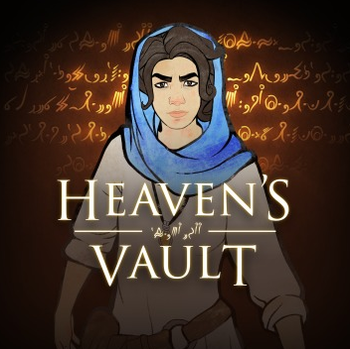 "Stories don't have tidy beginnings. The past is always present. But there has to be a spark. Something that brings the past to light."
Aliya Elasra, in the intro.
Advertisement:

Heaven's Vault is an archaeological adventure video game developed and published by indie studio Inkle Inc. The game was released for Windows in April 2019.

The player takes control of Aliya Elasra, a young female archaeologist, who is suddenly recalled from studying the forgotten history of the Nebula, the stretch of space she lives in. A well-known member of her university has gone missing, and Aliya has been chosen to track the man down and find out what happened to him. What starts as a simple job quickly escalates into an epic journey that takes Aliya far beyond the boundaries of known space into regions no human has been in centuries, and what she discovers has the potential to change the fate of the entire Nebula forever.

Heaven's Vault's most distinctive feature is Ancient, a meticulously-constructed fictional language that is mostly unknown In-Universe when the story begins. It's up to the player to use the few words Aliya knows to discern the meanings of more complex texts they discover on their journey, using logic, intuition and often plain guesswork.

The Novelization was released in November 2021 in two volumes subtitled The Loop and The Vault.

A fan-based Mini-Game, Vaultle, was also created, which is Wordle in Ancient.