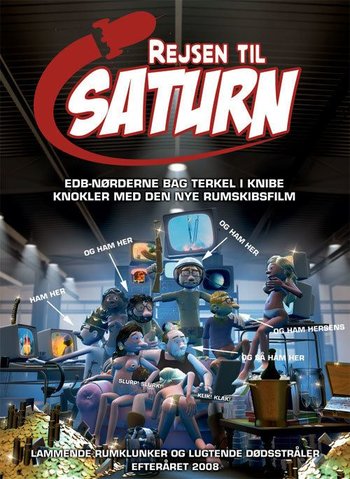 "Alas, Per. Cruel testicular torture is just one of the things we must endure for the Motherland."

Journey to Saturn (Danish: Rejsen til Saturn) is a 2008 Danish CGI movie loosely based on a 1977 comic by Claus Deleuran.

Denmark is finally going to become a spacefaring nation with industrial Mogul Kurt Maj's new rocket, that will launch a mission to claim Saturn for Denmark, headed by the totally not psychotic Sergeant Skrydsbøl. Shortly before launch, the navigator has a fatal encounter with the Danish Health Care system and his replacement, Per, is called in at short notice. But Per has a dark secret that his ex-girlfriend Susanne is about to find out. Then there is Jamil, who joined the mission to get Danish citizenship and Pussy-Ole, with his never-ending supply of beer and German Alpe-porn.

It can only go wrong. It doesn't. And that is bad, because Kurt Maj has got plans of his own ...