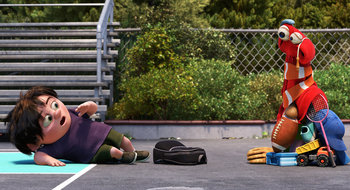 Lou is a 2017 animated short film (6 minutes) by Pixar, one of the Pixar Shorts. It was directed by Dave Mullins.

The setting is the playground at a day-care center. The lost-and-found box is the home of a creature called "Lou" for the missing letters on the outside of the box, which says "_OST & F__ND". Lou is a sentient being formed by all the odds and ends in the box—a red sweatshirt that forms his body, two different-sized baseballs that form his eyes, a book that sometimes forms a mouth, and other sundries. After the kids leave every day Lou scarfs up the things they've left behind and adds to himself.

One day Lou sees a boy named J.J. out in the yard bullying other kids and stealing their toys. Lou gets mad and decides to steal J.J.'s backpack which contains all the stolen toys. A merry chase ensues as J.J. tries to get the toys back from Lou, until Lou realizes why J.J. is a bully to begin with.

Lou played in theaters in front of the Pixar feature Cars 3.