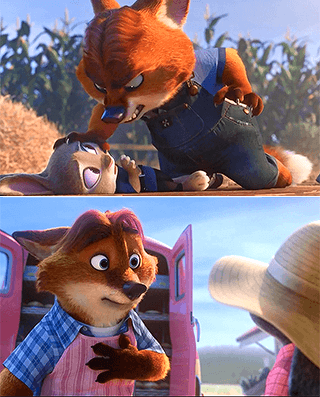 "Hey, Judy. I'd just like to say I'm sorry for the way I behaved in my youth. I had a lot of self-doubt, and it manifested itself in the form of unchecked rage and aggression. I was a major jerk."
— Gideon Grey, Zootopia
Advertisement:

A mean kid from school or the neighborhood, who treated people like dirt and ruled over the class with an iron fist turns up again. They were pretty, petty, judgmental, quick to shove other hapless students in their own lockers or slander them to their faces, and now they're... apologizing?

Yep, that grade A pain in the neck has seemingly turned over a new leaf. The reason varies from person to person. Maybe their victims gave them a taste of their own medicine. Maybe they graduated and realized the real world isn't as easy as they thought it would be in school. note In many cases, though not all, they reform after having a few years of adult life under their belt. Maybe they did some soul-searching, became more enlightened or matured significantly and realized that's not the person they want to be. Maybe they were just tired of being mean. No matter what reason, they are trying to change for the better. Of course, not everyone is likely to forgive them, and they probably wouldn't blame them if they didn't.

There may be moments where they slip back into their scheming ways but they'll usually catch themselves in time before they do anything too awful. And of course just because they are nicer doesn't mean they lose their biting wit. (That is, if they had any in the first place) Also, if they're still a bit of a jerk despite changing their ways, then they fall into Reformed, but Not Tamed.

Often overlaps with The Atoner and may be the ultimate goal of a Redemption Quest. If the former bully somehow doesn't feel sorry for his past actions but stopped for some other reasons, he can be the child version of Retired Monster, unreformed on the inside and without repentance and only changing in the acts. Another overlapping trope is Bully Turned Buddy, where the bully may not be reformed, but does manage to befriend their former victim.

If they were initially mean and horrible...and didn't get any nicer (if not worse) as they got older, they're the Schoolyard Bully All Grown Up.

Compare Former Teen Rebel, where the character may have been rebellious, but weren't necessarily mean or a bully. Also compare and contrast to the Lovable Alpha Bitch, who has enough nice qualities to balance out the bad ones, and the Lovable Jock and Dumb Jock, since the former is just a Nice Guy all around and the latter is probably too stupid to be mean. If they were always reluctant about bullying, see Peer-Pressured Bully.

Contrast Used to Be a Sweet Kid when they start off a decent, kind individual, but then progressively took several levels in Jerkass maybe becoming an Evil Former Friend or may have even undergone a Start of Darkness turning into a Tragic Monster in the worst, most tragic cases.

Cartman changed his bad ways when he becomes an adult.

Cartman changed his bad ways when he becomes an adult.