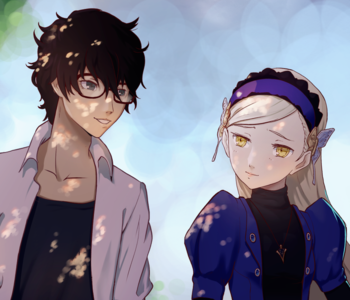 . (Full version with spoilers can be found here

◊.)
Akira Kurusu is a strange kid. Quiet, mousey, and nearly perpetually glum. He does a good job of pretending everything is normal, but there's always the hint that there's something wrong beneath the surface. At least, that's the impression Ryotaro Dojima got when he agreed to take the 11-year-old in as part of a school exchange program. Strangely enough, the kid's parents are nowhere to be found, and all calls to the phone numbers on Akira's records lead to dead lines.
Advertisement:

Unbeknownst to anyone else, Akira's parents have been dead for over a year. This exchange program is his last-ditch effort to find obtain some normalcy when he had none. He just had to keep his head low for another year until he could figure out what to do since no one else seems to know or care enough to tell him.

But this illusion of normal life is quickly shaken by the arrival of Dojima's nephew, Yu Narukami, the strange fog, and a string of bizarre serial murders that have swept through the otherwise sleepy town of Inaba.

Forewarned is Forearmed is a series of Persona 4 and Persona 5 fanfics written by VampireBadger. It follows Akira as a witness to the happenings of Inaba, all while he gets increasingly entangled in the supernatural and his future as the Trickster.

The story is clearly written with the mindset that the reader knows the stories of Persona 4 Golden, Persona 5 Royal, and Persona 5 Strikers. All spoilers pertaining to those games will be left unmarked.

You Have Been Forewarned.

Forewarned is Forearmed contains examples of: