Fanfic / Why Am I Crying? 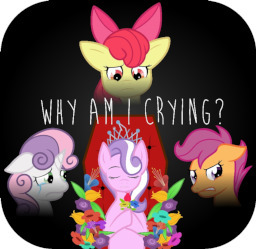 Why Am I Crying? Cover Picture
Advertisement:

Why Am I Crying?

is a My Little Pony: Friendship Is Magic Fan Fic written by Rated Ponystar.

When Diamond Tiara gets hit by an out-of-control carriage and dies from her injuries, the Cutie Mark Crusaders, like everyone else in town, are shocked by this turn of events. But how do they deal with it now that the filly who did nothing but make their lives miserable is gone?

The fic is written in 12 chapters, with four comprising of an arc for each of the Crusaders.

The fic not only deals with the subject of death, but other life lessons like bullying, forgiveness and class conflict/warfare.

NOTE: This fic takes place between Seasons 3 & 4, and certain plot points were disproved by the Season 5 episode "Crusaders of the Lost Mark", but it's still a good story nonetheless.