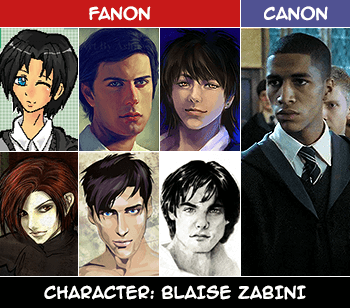 No one got Blaise Zabini right.
Credits: kayitea,

"Who was the mother of Bob?"

The realm of fanfiction is an interesting place. Where canon may be scant with details, fans of a work can take up the task of filling in perceived holes in a story. This may include creating their own characters to flesh out a character's lineage or coming up with reasons why certain ones behave as they do. After all, what if the story never bothers to tell us who the parents of the protagonist were? Or the deal behind that guy with the cool name who's always mentioned but never shown? If one of these fan works becomes popular enough, it will spread across the community and its ideas become an accepted fact of the show/book/movie's lore. Or mocked, if the fic is lacking in quality. Either way, these questions raised by the canonical work which the fans latched onto haven't been answered and never will be, so fans are free to continue playing with them... right?

Outdated by Canon is when fan works (and the theories backing them) are Jossed by revelations or events in the canonical product; most often in regards to characterization. For example, a fanfic writer might decide that Bob's unseen mother is a Retired Badass who instilled and promoted Bob's own thirst for adventure. This fanfic becomes popular and soon the entire fandom chooses this as their fanon, with other fanfics following suit. Various stories are made about Bob's mom teaching him how to fight, or giving him hero advice, or even coming out of retirement to help Bob and his friends stop the Big Bad. Then several installments later, when the creators of the canonical work finally take us to Bob's childhood home to meet his mom, it turns out she's an overprotective woman who's terrified of even leaving her house. These fan works are now outdated pieces of media that have been entirely discredited, leaving future fans who find them wondering why an old fic they just stumbled upon has Bob's mom threatening to punch out an eldritch abomination instead of fainting at the sight of one.

The earlier the fanwork was made in the life of the work that inspired it, the more likely it will be hit by this trope: after all, the beginning of a work is when the audience has the least understanding of the world they've been presented with, increasing the chance of early theories being jossed.

Also a specific form of Canon Foreigner, O.C. Stand-in, and potentially Hilarious in Hindsight. Some fans may invoke Better Than Canon and Fanon Discontinuity, especially if one specific character interpretation was popular with the community because that version was well-written or served as great eye-candy. Often the result of an Unknown Character finally getting revealed.

This is only a trope applicable to fan works, as any licensed examples fall into the Canon Discontinuity, Canon Marches On or What If? scenarios. Part of Time Marches On. See also Resolved Noodle Incident. Contrast Ascended Fanon or I Knew It!, where the popular fanfic interpretation ends up being part of canon either because of its popularity with fans or because that was always the plan.

Spoilers for the source material may be unmarked, as examples need to explain how the fan works are outdated. Read at your own risk.