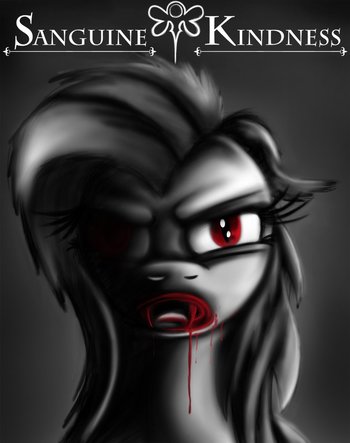 She wants blood.
Through a twist of fate, Twilight's spell removes the vampire essence of the vampire bats, restoring them to regular fruit bats. Sweet Apple Acres was saved and everypony was happy that the farm could continue without trouble. What they never suspected was that the essence itself was still alive and seeking a new host to corrupt to its will. And it has found one in the Element of Kindness.

Attaching itself to her, Fluttershy slowly lost her health before "death" seemly claimed her, leaving all to mourn for her passing. Days later, she awakens again with the corruption now complete. Driven by evil and instincts, there is only one thing that Fluttershy wants and she has an entire town that can give it to her.

Sanguine Kindness is a My Little Pony: Friendship Is Magic Fan Fic by Rated-R-PonyStar. The story's first chapter was released in April 2014 with the final chapter being released in August 2020, it can be read in it's entirety here