We All Die Someday 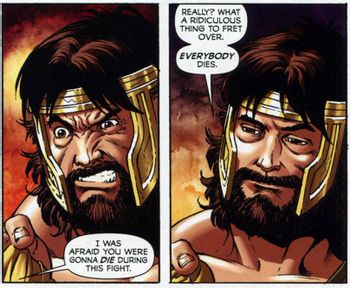 When you're immortal, it just takes longer.
"Remember friend as you walk by
As you are now so once was I
As I am now you will surely be
Prepare thyself to follow me."
— Unknown
Advertisement:

A Stock Phrase that acknowledges our own mortality. Good guys, bad guys, and everybody in between will one day have to recognise that none of us will live forever — at this level of reality, at least. Even those who do may have pangs of regret because of this trope. If villains say this line, it could be their reason for their disregard of life in general. If it's a hero, expect them to be the more cynical, disillusioned type. If either of them are the Anti-Nihilist, then the phrase becomes more optimistic, i.e. "we all die someday, so be awesome today!" Depending on where we fall on the sliding scale, we may get a "but not today" rebuttal, or a "but not forever" rebuttal for works that hold to the existence of an afterlife.

See also We Are as Mayflies, Don't Fear the Reaper, Not Afraid to Die and Life Will Kill You. Compare Who Wants to Live Forever?. Do not confuse with Kill 'Em All. Contrast Living Forever Is Awesome and Immortality Seeker. A work may invoke this trope in a Deadly Distant Finale. One Stock Joke referencing this trope is The Three Certainties in Life.