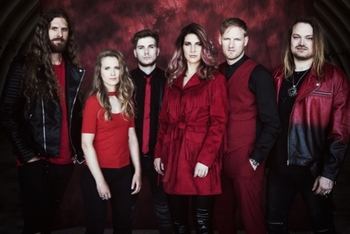 Delain is a Dutch Symphonic Metal band founded by keyboardist Martijn Westerholt (brother of Robert Westerholt) in 2002, after leaving Within Temptation the year prior due to Pfeiffer's disease. The band released a demo, Amenity, but Martijn abandoned the project afterwards.

Three years later, joining forces with singer Charlotte Wessels and signing a contract with Roadrunner Records, Martijn restarted Delain, envisioning it as a musical project featuring various guest musicians from symphonic metal bigwigs Epica, Within Temptation, Nightwish, and others. This vision came to bear fruit as Lucidity, released in 2006 despite delays. The live band was then formed as Delain accepted offers to tour around the Netherlands and Europe, and has undergone frequent lineup changes since.

On February 15, 2021, Martijin Westerholt issued a statement via the band's Facebook page

, that the other members had decided to leave the group. Westerholt wrote "For the last year or so, the collaboration within the band ceased to work as well as it once had. Some of us were no longer happy with the current roles in the band. We all tried very hard to find a solution for over a year, but sadly we were unable to find one." He then said he would be continuing on with Delain as a solo project. Charlotte Wessels also made a statement

where she apologized to fans who had been patiently waiting for the band to return to the stage, but "[simply] put, it is the sad conclusion of more than a year of trying to find solutions to built up grievances."

The band is named after the fictional Kingdom of Delain in Stephen King's The Eyes of The Dragon.

The Glory and the Tropes: