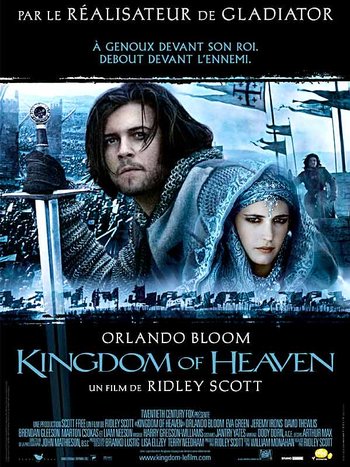 The Box Office le veult!note The Box Office wills it!
Balian: What is Jerusalem worth?
Saladin: Nothing. [beat] Everything.
Advertisement:

Set in the 12th century, the protagonist is a tormented blacksmith grieving after his wife's suicide. A baron from the holy lands rides by and asks him to go on a Crusade. He says no. Then, after being antagonized by a local priest whilst in the depths of his misery, he lashes out in rage and kills him, leaving him with the options of staying to face charges, or joining the baron to live in relative freedom.

This film is loosely based on the historical Balian of Ibelin during the Fall of Jerusalem.

Kingdom of Heaven provides examples of: