Film / A King in New York 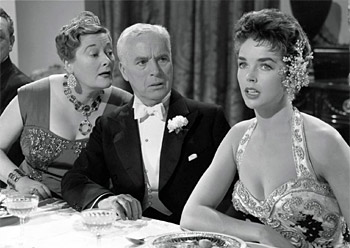 A 1957 British comedy film written by, directed by, and starring Charlie Chaplin in his final starring role, made after his re-entry into the United States was refused because of his political affiliations.

The story follows the misadventures of the deposed King Igor Shahdov (Chaplin), who fled to the United States after his country went into revolution, only to discover his securities were embezzled by his Prime Minister.

While struggling about what to do next, he meets a comely young woman who invites him to a party where he is manipulated into participating in clandestine commercials. At one point, he is invited to recite some Shakespeare on TV without his knowledge and becomes a media sensation. Although indignant at the deception, the King agrees to appear in numerous commercials and improbably becomes even more popular despite apparent disasters.

Along the way, he makes friends with a precocious boy named Rupert (Michael Chaplin), whose parents are former communists who are incited for contempt of congress for refusing to cooperate in House Congressional committees. When Shahdov is discovered sheltering the boy after he was found cold and lost after running away from school, the King himself is subpoenaed to the committee.