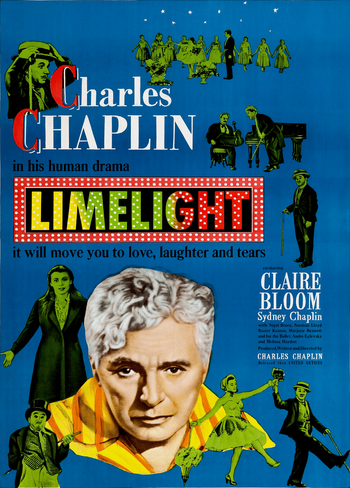 London, 1914. Calvero (Chaplin), once a famed stage clown but now a washed-up drunk, saves a young ballet dancer, Thereza "Terry" Ambrose (Bloom), from suicide. As he nurses her back to health, he also helps her to regain her self-esteem and resume her dancing career. While doing this he also begins to regain his own self-confidence, although his attempts at making a comeback are less successful. Terry wants to marry Calvero in spite of their age difference, but he believes that Ernest Neville (Sydney Chaplin), a young composer she's befriended, would be better suited for her. In order to give them a chance together, Calvero leaves home and becomes a street entertainer. Some time afterward Terry, who's now starring in her own show, finds Calvero and persuades him to return to the stage for a benefit show. Reunited with an old partner (Keaton), Calvero gives a triumphant comeback performance but immediately suffers a heart attack and dies in the wings... while just a few feet away from him Terry, the second act on the bill, dances on stage. This represents the end of one generation and the coming of another, the fading of age and the emergence of youth under the Limelight, as said during the initial credits.

Chaplin's last Hollywood film, Limelight was released amidst public controversy, and passed over by most American theaters, as at that time Chaplin was refused re-entry to the U.S. on alleged grounds that he was a communist sympathizer. It was re-released in the United States in 1972, and because the film played in a Los Angeles theater for the first time that year, Chaplin was honored with the only competitive Academy Award of his career (for Best Original Score) two decades after the film's initial release.