Film / A Countess from Hong Kong 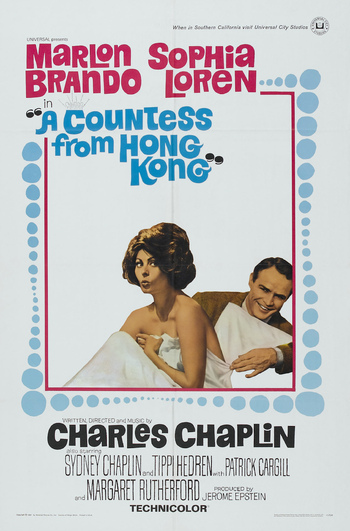 Ogden Mears (Brando), the new U.S. Ambassador to Saudi Arabia, is traveling back to America by ship. After a night out in Hong Kong, he ends up with Natascha (Loren), one of the dance hall girls, in his stateroom. She is a Countess from Russia who is stateless with no family, and hopes to stay aboard until she gets to America. However, Mears has a problem: he is starting divorce proceedings and knows Natascha's existence can damage his reputation. So he sets a plan in motion before his wife Martha (Hedren) can arrive.

Chaplin's last film. He had written the original story in the 1930s with an idea of starring in the film himself along with Paulette Goddard. A Troubled Production due to its lead actors' personal disagreements and Chaplin's working method not being to everyone's taste, the film was a critical failure upon release, and did poorly at the box office in both the UK and the US (where it grossed less than $2 million); however, it was a success in Europe and Japan and the soundtrack did well.

The Film contains the following Tropes: