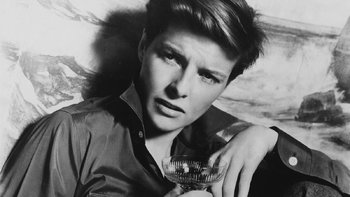 Hepburn plays the title role of Sylvia Scarlett. When her father Henry (Edmund Gwenn), while employed as a bookkeeper for a lace factory, is discovered to be an embezzler, they flee from the police, with Sylvia masquerading as a boy, to live as con artists. While on the run, they meet a dashing rogue, Jimmy Monkley (Grant), who partners with them in their con games.

This film was the first pairing of Grant and Hepburn, who later starred together in Bringing Up Baby (1938), Holiday (1938), and The Philadelphia Story (1940).