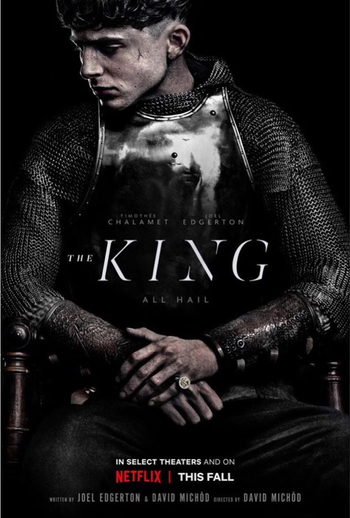 "These men deserve your confidence. And if you cannot give them that, at least then tell them a magnificent lie."
Advertisement:

The King is a 2019 historical film directed by David Michod.

It is a loose—very loose—adaptation of William Shakespeare's "Henriad" plays, namely, Henry IV, Part 1, Henry IV, Part 2, and Henry V. While it includes some plot elements from the plays (the gift of tennis balls, Henry having a drinking buddy named Falstaff), it uses none of Shakespeare's dialogue and changes several other plot points.

—aka "Prince Hal"— (Timothée Chalamet) loathes his father King Henry IV (Ben Mendelsohn) and has no interest in reigning over England, instead spending his time drinking and whoring in the slum of Eastcheap. His main companion in drinking is Sir John Falstaff (Joel Edgerton, who also co-wrote the screenplay), who is not the Lovable Coward of Shakespeare's plays, but a brave warrior and canny military strategist who has fallen on hard times.note The character may also be based partly on Sir John Fastolf, who was older than Henry but far from old, and was an experienced soldier who also was something of a strategist.

His father is so disgusted by his dissolute son that he tabs Prince Henry's younger brother Thomas for the succession. That's fine with Hal, who regards his father as an incompetent tyrant who has brought strife and ruin to England. But when Thomas is killed fighting the Welsh (Henry IV being the sort of king who generates rebellions all over the place), and Henry IV dies soon after, Prince Hal becomes Henry V by default.

The new king takes pains to end the civil strife of his father's reign, pardoning all rebels and generally letting bygones be bygones. But Henry's desire for peace is thwarted by the continued provocations of the Dauphin

, heir to the throne of France (Robert Pattinson). The Dauphin, scornful of Henry V as a callow youth and ridiculing the claim of English kings to the throne of France, sends Henry a "gift" of tennis balls upon Henry's coronation. Then he sends an assassin, who winds up defecting to the English. Henry declines to rise to this bait, but when Henry's chief counselor William Gascoigne (Sean Harris) uncovers a plot backed by the Dauphin to overthrow Henry, the king's patience runs out and he declares war on France. Henry takes an army to France and, after capturing the castle of Harfleur, meets the Dauphin and his army in battle at a place called Agincourt