Film / Kimmy vs. The Reverend 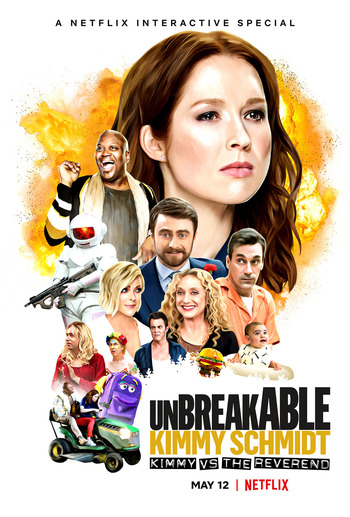 Unbreakable Kimmy Schmidt: Kimmy vs. The Reverend (2020) is The Movie for Unbreakable Kimmy Schmidt, released on Netflix. It is set a handful of years from the end of the show and follows the titular protagonist Kimmy Schmidt (Ellie Kemper) as she prepares for her wedding to dreamy English prince, Frederick (played by Daniel Radcliffe). However, what seems like a simple item leads to Kimmy finding out that the Reverend may have kidnapped another girl (or two... or three... or more!) that the authorities failed to rescue. Her wedding plans are interrupted by the need to save them.

The special is an interactive choose-your-own-adventure story using the Branch Manager technology introduced in Black Mirror: Bandersnatch; players can choose the characters' actions by selecting one of a handful of options on their screens, and Multiple Endings can be achieved based on your choices.

Unbreakable Kimmy Schmidt: Kimmy vs. The Reverend provides examples of: