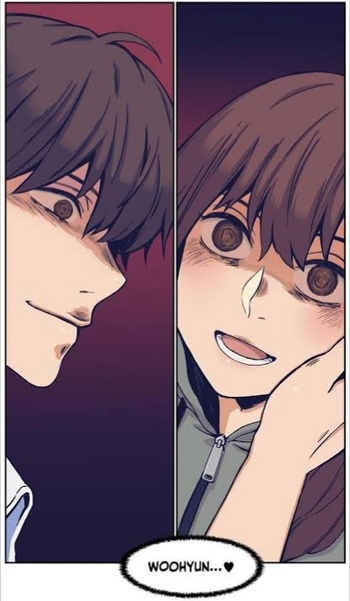 Love Makes You Crazy is a bit of an... understatement when it comes to these two...
"Let me tell you a little something about love, Dennis. It has voracious appetite. It eats everything: friendship, family, it kills me how much it eats. But I'll tell you something else, you feed it right and it can be a beautiful thing, and that's what we have. Y'know, when someone believes in you man, really believes in you, you can anything, any fucking thing in the entire universe and when you believe right back in that someone, then watch out world! 'Cause nobody can stop you then! Nobody! Ever!"
— Arnie, Christine
Advertisement:

Generally speaking, when a Yandere falls in love with someone, they tend to play for keeps. No matter how much blood has to be shed, no matter how much suffering they inflict, your common-or-garden yandere will do anything for and to be with the one they love.

So what would happen if two yanderes got together?

In theory, this would seem like an ideal set-up. With two individuals sharing such an unquestionably insane devotion to one another, you immediately bypass the typical shenanigans that accompany the archetype. Right?

Uhhhh, that's where things get interesting...

When left on their own, these couples will be Sickening Sweethearts at worst. But try to get between them, however... and you should watch out. Come hell or high water, they will do whatever it takes to remain together, and chances are that things will end badly for you and whoever stands in their way.

If this pair comes with a side of Outlaw Couple, Serial Killer, Ax-Crazy, or anything else less-than-legal, expect that little Berserk Button to become several magnitudes more difficult to avoid. If such an unholy couple is also married, this can also overlap with Unholy Matrimony (or, God forbid, The Family That Slays Together should they end up mating and producing offspring).

And that's all just assuming that the relationship is a healthy one...

See also Psychotic Love Triangle, if another Yandere is butting in with the couple.