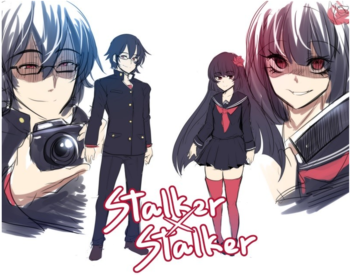 . The story follows high-schoolers Junko and Yukio, two Yanderes who have fallen madly in love - with each other.

Though the comic primarily revolves around Junko's and Yukio's antics and general love life, other characters have been introduced during the course of the series, resulting in various episodes focusing more on a specific background character and their backstory and personality.

The comic is mostly Slice of Life, but since it's written from the perspective of two completely insane stalkers, expect a lot of Psychological Horror and Fridge Horror to show up. With the addition of new characters, the story now dips into light Body Horror as well.

The comic is currently available on Merryweathery's Twitter page

Compare to I Made A Comic About Internet Explorer, another twitter series by this duo.