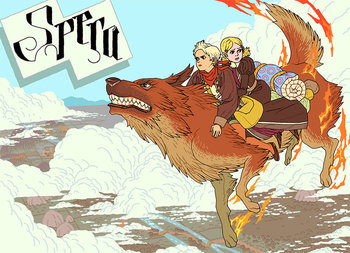 Pira and Lono are two princesses from rival kingdoms who have become great friends after years of diplomatic talks between their parents. Suddenly, peace is shattered when the Starless Empire, run by Pira's tyrannical mother, murders Lono's father, the King of the Grasslands, with the intent to slaughter the kingdom and take it for herself. Pira decides to travel to save Lono and run away to the mystical land of Spera, a land spoken of in legends where adventurers wander about fighting fierce monsters and hunting for treasure. Joining them are their companions Yonder, a fire spirit in the form of a dog, and Chobo the Warrior Tabby, a Conan the Barbarian parody who as the name implies is a cat.

Spera got it's start as a huge collaborative project written primarily by Josh Tierney, and drawn by roughly fifty different artists. This eventually grew into a physical comic series, complimented by a series of web one-shots that support and contain vital plot elements for the main series