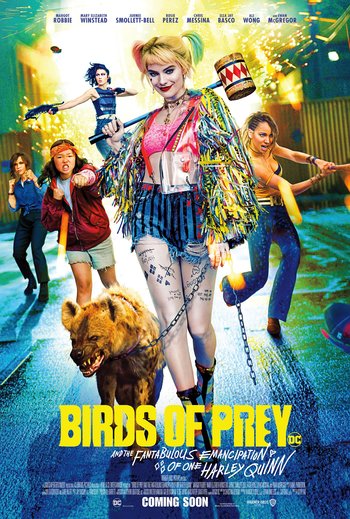 Prey for Gotham.
"I'm the one they should be scared of! Not you! Not Mister J. Because I'm Harley fuckin' Quinn!"
— Harley Quinn
Advertisement:

Birds of Prey (and the Fantabulous Emancipation of One Harley Quinn), also marketed as Harley Quinn: Birds of Prey, is an action/comedy superhero film based on the comic book characters of the same name, and the eighth installment in the DC Extended Universe. It is directed by Cathy Yan, written by Christina Hodson (Shut In, Unforgettable, Bumblebee), and produced by Margot Robbie through her company, LuckyChap Entertainment. An uncredited Chad Stahelski (of John Wick fame) supervised some action scenes as second unit director.

The film is rated R in the US for "strong violence and language throughout, and some sexual and drug material", a first for the DCEU, though Batman v Superman's Ultimate Edition re-release was also rated R. The film is also the shortest thus far in the franchise at 108 minutes long with the rest of the films clocking in at over 130 minutes.

It was released on February 7, 2020. Due to its early release date, Birds of Prey was ultimately one of the few major franchise films to be theatrically released worldwide in 2020, before the COVID-19 Pandemic shut theaters down for months on end.

Harley wound up reappearing the following year in The Suicide Squad.

open/close all folders
# to H
I to Z
♫ Le ciel bleu sur nous peut s'effondrer
Et la terre peut bien s'écrouler
Peu m'importe, si tu m'aimes
Je me fous du monde entier
Nous aurons pour nous l'éternité
Dans le bleu de toute l'immensité
Dans le ciel, plus de problèmes
Mon amour crois-tu qu'on s'aime? ♫ Translation ♫ The blue sky over us can collapse on itself / and the ground can cave in. / Little matters to me if you love me / I couldn't care less about the whole world / We will have for us, eternity / in the blue of all the immensity / in heaven, no more problems / my love do you believe that we love each other? ♫