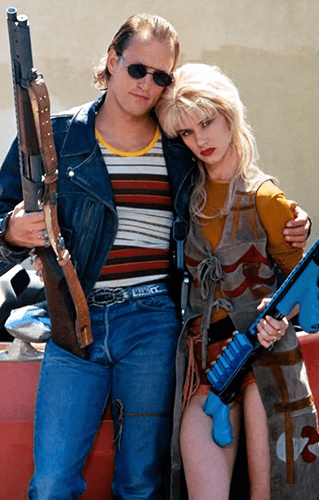 A match made in Hell.
"Some day, they'll go down together
They'll bury them side by side
To a few, it'll be grief
To the law, a relief
But it's death for Bonnie and Clyde."
—Bonnie Parker, Bonnie and Clyde
Advertisement:

Two lovers who team up to commit crime, usually violent crime and especially robbery, and are usually on the run from the law. Such couples are almost always inspired by Bonnie Parker and Clyde Barrow,

"Bonnie & Clyde." Which one is the brains of the outfit tends to vary from couple to couple. Sometimes one is a calm and collected criminal who charms the other into a life of crime. Other times, one is a loose cannon while the other is a cool-headed professional. Many Bonnie and Clyde stories end in tragedy, as did the original couple.

This one is Truth in Television, though it should be noted that most fiction tends to romanticize the life of crime that such characters tend to lead.

Expect some Back-to-Back Badasses moments, as well as a suicide if one partner dies. May result in sympathetic villains or even Sympathetic Murderers, especially if their affection for each other is given the spotlight.