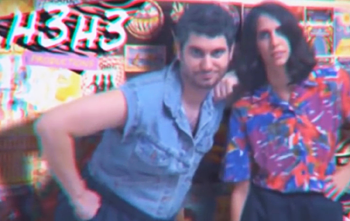 h3h3Productions is a YouTube comedy channel run by husband-and-wife team Ethan and Hila Klein. The channel has a free-form format, but Ethan often makes Reaction Videos for outrageous and meme-worthy YouTube videos. Rather than taping his face as he watches each video, however, he instead displays highlighted clips from the videos and discusses them. Occasionally, the pair performs skits based around the video at hand. Ethan and Hila continuously revisit the funniest aspects of the videos they highlight, creating a sense of continuity.

Their former side-channel Ethan and Hila had a more vlog-like format which has since been merged into the main channel.

Wow, Ethan! Great moves! Keep it up, proud of you!
— Michelle Obama