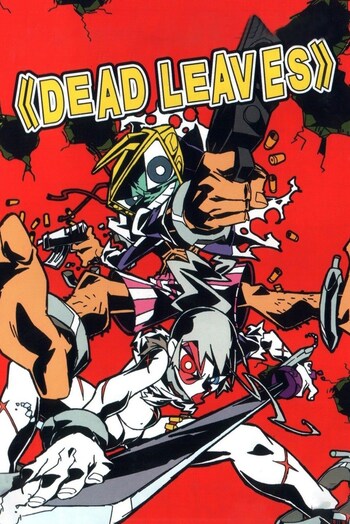 "We the people, who are dedicated to protecting the common good, do hereby charge you with trespassing, theft, violence, assault, illegal possession of firearms, and a really crappy attitude! You are therefore sentenced to life imprisonment in the DL Correctional Facility on the moon."

Either way, things are gonna get weird.

Pandy (a woman with a red ring around her right eye) and Retro (a man with a TV for a head) awaken on Earth with no clothes and no memory of their pasts. After deciding that they need clothes and food, the duo go on a crime spree and car chase through the streets of Tokyo, featuring a completely bizarre Neck Snap martial arts move, ridiculous amounts of gunplay, a battle with a giant robot, and probably a hundred dead policemen.

All in about 4 minutes.

And then it gets really fucking weird.

They end up incarcerated in the titular lunar prison facility. After they discover Dead Leaves serves a dual purpose — as a top-secret cloning facility — and all of the prisoners are "cloned genetic garbage", the imprisoned lovebirds orchestrate a mass prison break.

Did we mention the straitjacket sex scene, the prisoner with a drill for a penis, the insane mostly-naked warden, and the creepy children's story about caterpillars?

Youtube carries a legal stream of this OVA. It is, however, rated for mature audiences, and thus, you need an account and need to be over 18 to view it.