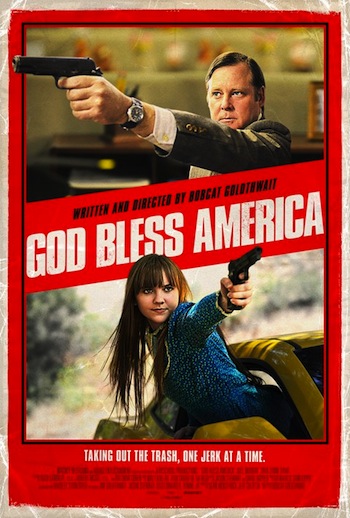 Michael Fuller: [wounded] Are you really willing to DIE, just because you don't think I'm NICE? [...]
Roxy: He just wishes everyone would act nice. I, on the other hand, think your politics are SHIT! (BAM!)
Fuller: You bitch...
Roxy: Yep! (BAM! BAM-BAM-BAM!) [standing over the fresh corpse, with the smoking gun in her hand] Frank, exactly what part of his politics do you agree with?
Frank: [still holding the gun with which he just shot and wounded a guy because he didn't like that guy's attitude in a television show] Less gun control, of course.
Roxy: But Frank, then every nut would have a gun!
Advertisement:

Have you ever watched a particularly annoying Reality Show and thought to yourself, "man, someone should give those little twits what they have coming to them"? Well, Bobcat Goldthwait, maker of World's Greatest Dad, feels your pain.

God Bless America is a 2011 Black Comedy written and directed by Goldthwait and starring Joel Murray (brother of Bill) and Tara Lynne Barr. The plot is basically Falling Down, played for very dark laughs. It follows Frank Murdoch, a middle-aged schlub who has lost his wife and his job, and worse, has just found out that he has terminal brain cancer — all in the span of one day, no less. Contemplating suicide, Frank's life is changed when he watches a My Super Sweet Sixteen-esque show in which a Spoiled Brat named Chloe throws a tantrum over getting the wrong fancy luxury car for her birthday. While most people would probably find extra motivation to go through with it after watching such a scene, Frank instead sets out to make something of the time he has left, killing Chloe and declaring war on all the annoying jerkasses and vapid pop culture figures of America. Along the way, he meets Roxanne "Roxy" Harmon, a teenage classmate of Chloe's who shares Frank's misanthropy, and joins him on his crusade.

The film premiered at the Toronto International Film Festival in 2011, and was released on demand on April 6, 2012. Here's

the red-band trailer, and here's