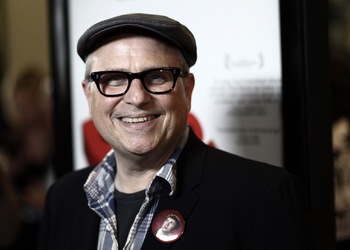 Bobcat Goldthwait, reporting for duty!
"Quit everything until you find something that you just cannot quit."
Advertisement:

Robert Francis "Bobcat" Goldthwait (born May 26, 1962) is an American comedian and director who rose to fame in the The '80s for two things: his role of Zed in the Police Academy series and his stand-up act, both of which had him acting batshit insane.

The first film he directed was Shakes the Clown in 1992, which was not a box-office success, but developed a cult following. Subsequent guest appearances on The Arsenio Hall Show (the imminent cancellation of which he protested by trashing the set and spray-painting "Paramount sucks" on a wall) and The Tonight Show with Jay Leno (in which he lit the guest chair on fire) led to some viewers wondering if the crazy persona was entirely an act.

Goldthwait's next notable return to directing came over a decade after Shakes, when he directed episodes of Jimmy Kimmel Live! During a break from that show, he directed his next feature film Sleeping Dogs Lie, which was about an... interesting piece of subject matter to say the least. His next film, arguably his best-received, was World's Greatest Dad starring Robin Williams. His latest film, Willow Creek, was released in 2014.

He acts much calmer in person now, and still does stand-up occasionally. He's also on Instagram

Some of Bobcat Goldthwait's acting roles include:

Some of Goldthwait's directing credits include: