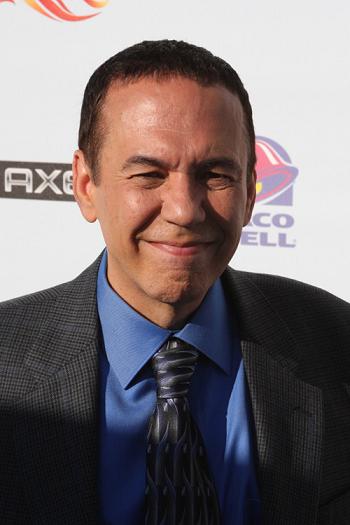 AFLAXED!!!
"If they'd wanted a nice parrot, they wouldn't have asked for me."
— Gilbert Gottfried on his role in Aladdin (paraphrased)
Advertisement:

Gilbert Jeremy Gottfried (February 28, 1955 — April 12, 2022) was everybody's favorite squinty-eyed, grating-voiced, pint-sized, obnoxious, hilarious stand-up comic and voice actor. Known as Iago in the Aladdin franchise (and by extension, the Kingdom Hearts series and House of Mouse), Igor Peabody in the Problem Child movies, Mr. Mxyzptlk in Superman: The Animated Series (a role he would later reprise in LEGO Batman 3: Beyond Gotham, Lego DC Super-Villains, and Justice League Action), Jerry the Bellybutton Elf from The Ren & Stimpy Show, Art De Salvo from Duckman, a troll from Dilbert, deranged dentist Dr. Bender and his son, Wendell, from a few episodes of The Fairly OddParents, Patrick Swayze and Jerry Seinfeld from Clerks: The Animated Series, Santa Claus from The Grim Adventures of Billy & Mandy, Digit from Cyberchase, monster toy Tickle Me Psycho on Robotomy, God in the Season 1 finale of Smiling Friends* which would be his final voice role before his death in 2022, the Aflac duck, Seymour Smoke from Allstate's fire safety PSAs, and years of comedy routines.

Gottfried's professional career first took off as a cast member on the NBC sketch show Saturday Night Live... during its widely-panned sixth season (1980-1981; the first season after Lorne Michaels and the remnants of the original "Not Ready For Primetime" cast left the show due to creative exhaustion). During those years, Gottfried had a full head of curly black hair, rarely if ever squinted, and actually had an indoor voice (though it did escalate into a No Indoor Voice from time-to-time. Still, if you ever watch a Jean Doumanian-era SNL sketch, you'll be shocked to find that, once upon a time, Gilbert was more-or-less soft-spoken). Gottfried only had one recurring character (Leo Waxman, wife of Denny Dillon's Pinky Waxman, a Jewish couple who host a talk show called What's It All About)note though he did have some funny one-shot characters, like Dr. Murray Abromowitz, a psychiatrist who comes on Weekend Update to complain about how unfunny the first episode of the show's sixth season was; Pepe Gonzales, a bull fighter who moves to New York City to fight traffic the same way he fights bulls; Dr. Swen Garazza, the head of the Citizens for a Better America who speaks out for people who want humble jobs, or, as he calls them, "hum jobs"; and Dr. Calvin Zuko, a doctor who claims the female orgasm isn't real, unaware that it's because he's terrible in bed and two celebrity impressions: controversial film director Roman Polański, and David A. Stockman (director of the Office of Management and Budget under President Ronald Reagan).

He also, along with Rhonda

Gottfried caught some heat while speaking at a roast soon after 9/11 and making an Empire State Building joke that popularized finding insensitive jokes about current events "too soon". He then saved himself by doing a take on The Aristocrats that opens up the documentary of the same name. He was then fired by Aflac for making jokes about the 2011 Japanese earthquake on his Twitter, showing that he had no fear of offensive jokes, nor enough sense to keep from making light of Japan's national crisis while also representing Japan's top insurer. He later responded to this by apologizing after virtually every joke. He also showed sincerety for the loss of a couple of comedians, as shown in this article

mourning the death of Robin Williams.

He co-hosted a Podcast, Gilbert Gottfried's Amazing Colossal Podcast with his friend Frank Santopadre, where they would interview veteran movie, television, music, and stand-up comedy stars. He even played a character in one episode of The Angry Video Game Nerd.

a Dramatic Reading of Fifty Shades of Grey. He also did dramatic readings of UK statute law for the UK broadcast of Last Week Tonight with John Oliver every time the show uses a clip of House of Commons debate (footage of which cannot be broadcast for comedic purposes in the United Kingdom, so Gottfried's reading is an intentionally bad substitute for the British market). Also, according to the same show, Jared Kushner sounds suspiciously like Gottfried. ("'Wait, you just recorded Gilbert Gottfried over him!' Well, you can never know!")

Gilbert passed away on April 12, 2022, aged 67, after what was described as a long illness. His family would later confirm he had died due to complications from recurrent ventricular tachycardia and muscular dystrophy (specifically type II myotonic dystrophy).