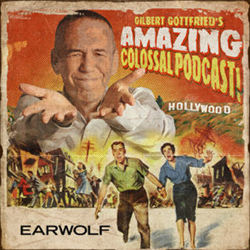 Gilbert Gottfried's Amazing Colossal Podcast was an interview focused podcast which started its run in June 2014 and continued until Gilbert Gottfried's death in 2022 (with re-uploads of old episodes continuing afterwards to honor his legacy) and was hosted by Gottfried and Frank Santopadre (executive producer of The View among others). Interviews were based on Gilbert and Frank's love of old movies and television and were usually old movie and television actors, plus Gilbert's Stand-Up Comedy friends. Gilbert and Frank formed a Straight Man and Wise Guy duo, Frank was calm and professional when talking to guests while Gilbert was enthusiastic and confrontational. Frank would be the one who researched the guest while Gilbert provided his own anecdotes that may or may not be relevant.

Regular and mini-episodes are posted weekly and can be found on iTunes and SoundCloud. It's official website can be found here