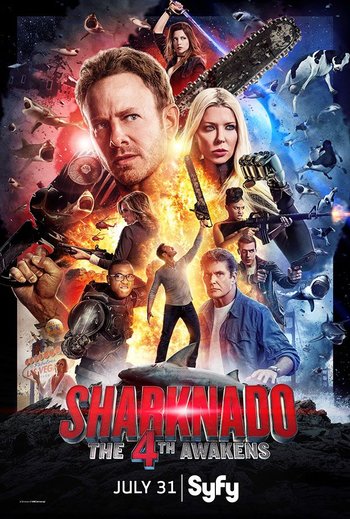 The fourth entry in the Sharknado franchise, following Sharknado 3: Oh Hell No!

Fin has enjoyed several years of peace to raise his newborn son, and to mourn April, whom he'd consented to remove from life support after four years in a coma. Thanks to a company known as Astro-X, any nascent sharknadoes have been suppressed, and a "Shark World" casino is opened up in Las Vegas to celebrate this victory. However, the phenomenon returns when a dust devil destroys the casino, unleashing the live sharks on display there upon Sin City. As increasingly freakish sharknado-variants begin to strike the rest of the United States, Fin is forced to take up the chainsaw once again ... as is April, who'd been secretly kept alive with modifications by her Mad Scientist father.