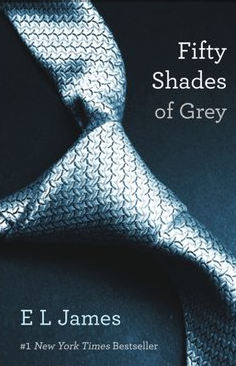 Basically, same characters, but less vampire, more sex. Then, the character names were changed from Edward Cullen and Bella Swan to Christian Grey and Anastasia Steele, and now it is not a fanfic but legit fic for sale.

"...reimagine[s] the Bella and Edward love affair set in contemporary Seattle, Washington with Bella as the young college graduate virgin and Edward as the masterful billionaire with secret sexual predilections.”

The book has five sequels. The first two, Fifty Shades Darker and Fifty Shades Freed, are the story of what happened to Ana after the first book ended. The other three are the POV sequels Grey, Darker, and Freed, which retell the original trilogy from Christian's point of view.

The first three books were made into same-titled films, released over 2015-2018. These have their own page here.