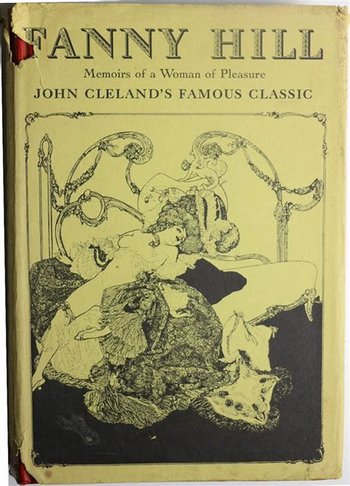 Fanny Hill: Memoirs of a Woman of Pleasure details the sexual adventures of a teenage girl in London. Orphaned at fifteen, Frances Hill, with little skill and education, must find a way to survive. She leaves her village for London and finds employment at Mrs. Brown’s brothel. Fanny believes her new job to be legitimate, but her curiosity and sensuality are aroused when the prostitute with whom she shares a room introduces her to sex. Mrs. Brown then tricks Fanny into “servicing” a client, and the girl is nearly raped. She escapes from the bordello and falls in love with a man named Charles, who is sent to sea by his father before he can provide for Fanny. Once more destitute and alone, Fanny finds work at an upper-class brothel, where she experiences a multitude of sexual acts and discovers that sex for money is not as satisfying as sex for love. Fanny is removed from the bordello by an elderly gentleman, who cares for her, instructs her in the arts and sciences, and, after eight months, dies, leaving her his fortune. Soon after her benefactor’s death, Fanny is reunited with Charles, and the two live happily ever after.

Alternative Title(s): Memoirs Of A Woman Of Pleasure