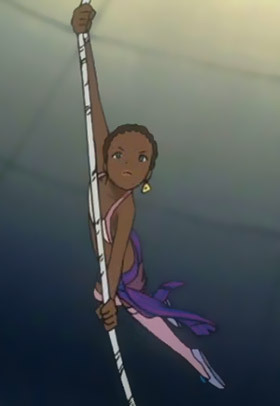 All in a day's work.
"She was born in the wagon of a traveling show
Her mama used to dance for the money they'd throw."
— Cher, "Gypsies, Tramps, and Thieves"
Advertisement:

The Circus Brat is someone who grew up in a traveling circus. Usually part of a long legacy of performers, and occasionally gypsies and mystics. This is becoming less used as traditional circuses become less popular, but it is useful for establishing a bunch of things about the character. Often, polar opposites of the Military Brat:

Sometimes, the portrayal is opposite to the above. Sometimes, the Circus Brat is forced to practice hours on end, painfully contort their body until it becomes accustomed to the stretch, and otherwise abused to enforce obedience and performance.

This is still a valid origin story in many fantasy settings pre-Industrial revolution, where television and video games haven't become wide spread.

This trope often applies to the children of carnies as well. Compare Wrestling Family. Also compare The Runaway, which often involves a child running away to the circus to become a Circus Brat. Subtrope of Raised by the Community.

Alternative Title(s): Running Away To The Circus