Fanfic / The Joy Of Battle 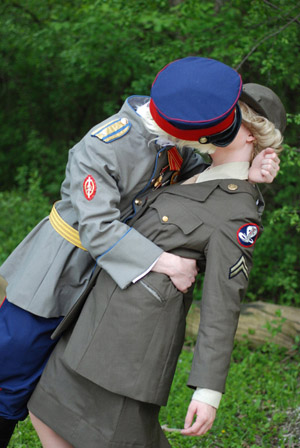 The fic writer cosplaying with her husband.
"When this war is over, whose side will you be on?''
—The Fury

is a Metal Gear Solid 3 Fanfic by the writer CobraShipper

Like the fan webcomic The Cobra Days, The Joy of Battle follows the missions of the Cobra Unit during World War II. The story first appeared on fanfiction.net in July 2010 and remains incomplete though it is still updated regularly. According to CobraShipper's DeviantArt page, under the name slythgeek

, The Joy of Battle was only meant to be a short novella but blossomed into an over 100,000 word epic.

The main arc of the story so far takes place from late 1943 to 1944 in England, France, and Germany with flashbacks to times earlier in the war and earlier in the lives of each of the Cobras. As the title of the fic implies, the story is mostly about the Joy (known as The Boss in MGS3) and features extensive Back Story about her relationships with her father and David Oh (aka Major Zero). As the fic is classified under "Adventure/Romance", there is a lot of time given to relationships, especially the one between Joy and Sorrow. It also focuses more on the spy game of the beginnings of Cold War and how the Cobra Unit was involved.

For the most part, the story incorporates Metal Gear canon and includes many Call Forwards to the MGS series with a healthy dose of the series' infamous Fridge Logic.

All of the story's reviews so far have been favorable.

This fanfic uses the following tropes: