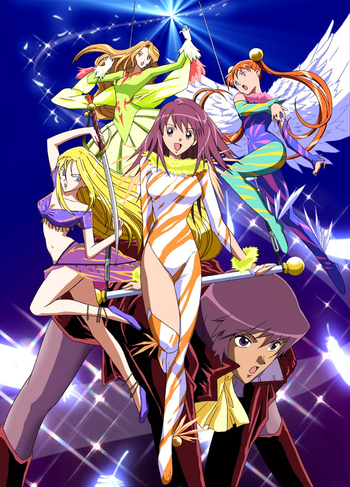 "Some day, Layla, the whole world will come to see the performances of that little girl. I assure you."
— Kalos Eidos
Advertisement:

The last clear memory that young Sora Naegino has of her deceased parents is the time they took her to an extraordinary circus called the Kaleido Stage, a few months before their deaths in an accident. At age 16, Sora graduates from junior high and decides to try going to the auditions for the (Cirque du Soleil-esque) Kaleido Stage in Cape Mery, USA. So, with the reluctant blessing of her adoptive parents, she goes to America to seek for her dream...

But it won't be easy. After an incident involving the theft of her luggage, Sora arrives late to the audition and is told to go back home and wait for the next round — a year later. However, when a performer is unexpectedly hurt, the owner Kalos Eido tells Sora to cover for her. Main Kaleido Stage star Layla Hamilton challenges her to perform Layla's trademark move, the Golden Phoenix, or quit the circus; Sora trains hard with the help of two other recruits (Anna Heart and Mia Guillem) and the company's stage manager (Kenneth "Ken" Robbins), and though she doesn't fully accomplish it, her determination convinces Layla to let her stay. Ever since then, Sora has to struggle extra hard to fulfill her dream: to become the Top Star of the Stage...

In short, take the sparkly costumes and cheery optimism of a Magical Girl series, remove a good part of the magic except for the Fairy Companion and have everyone try to break the spirit of the main character at some point and to different degrees. That's Kaleido Star.