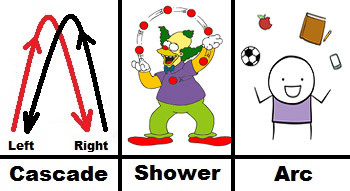 Juggling is animated in several different ways. Some are real juggling, some are juggling that is easy for the viewer to follow (or animator to animate), and some are physically impossible. There's nothing wrong with using any of these, but people who can juggle will look and wonder how anyone would actually achieve the feat.

Note: In the trope description, we use the term "prop" for any generic item the juggler is juggling.

The cascade is the easiest to learn, but looks chaotic at first glance. Because of the props passing in front of the juggler, it's a little more of a pain to draw. In reality only odd numbers of props pass between hands. Even numbers are divided by two and juggled in each hand.note Four ball juggling is juggling two balls in each hand at the same time, six balls are three in each hand, etc. The more props you juggle the higher you have to throw them to give yourself time to handle them all. The current record (as of 2021) for balls/beanbags is 14 beanbags with 14 catches.

The shower is what most people assume most three-ball juggling is, but it is much more difficult to master - you have to throw the balls REALLY HIGH to give yourself more time to transfer the balls with your other hand. It's easy to animate, though - you only need to draw a few frames and repeat. Sometimes the balls curve back upward of their own volition into the juggler's other hand rather than falling.

Arc juggling is an easy way to illustrate a character juggling without drawing any of the props blocking the view of the juggler - but there is no style of real life juggling which puts a juggler in this position. The juggler always has something moving into or out of his hand unless he has gone out of his way to toss everything up for a second (which is easy to throw, but hard to catch!).

In Real Life props are different colors because it is flashy and adds to the presentation, but you'll also notice that cartoon jugglers tend to use props which are all the same color. This saves on animation - if you do the juggling shower (circle), you would have to draw panels to take each different-colored prop all the way around. With all the balls being the same color, you only have to animate until the point where the next prop starts - with three balls for example, you only have to draw 1/3 as many frames.

Certain Acceptable Breaks from Reality/Artistic License – Physics apply to cartoon juggling, too. In reality, the more props you juggle, the higher they must be thrown to give the juggler more time to deal with the multiple objects, but this would require a large amount of panel space so animators keep the objects close to the juggler.