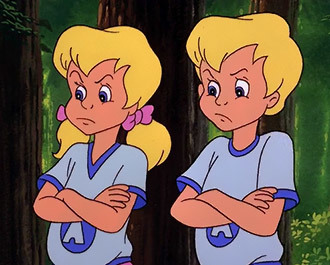 "Amazing! An exact duplicate of your brother. Only with pigtails."
— Dr. Fidgel, 3-2-1 Penguins!
Advertisement:

A set of twins who look and act for all the world like they're identical, except for the miiiinor detail that one's male and the other's female.

It's common — especially in drawn or animated media, where the creator has complete control over the appearance of the characters — to use brother-sister twins as being each other's Distaff Counterpart and Spear Counterpart. They often display identical twin tropes, such as Twin Telepathy or Synchronization — especially if they are Creepy Twins. It's a way to make sure that twins, even if they're not identical, are immediately identifiable as such if it's relevant to their characters, and there are no other visual cues to show that siblings are fraternal-twins instead of just regular brothers and sisters. If the two siblings drift apart at any point during the story, a Twin Desynch is likely, and often occurs at puberty when the secondary sexual characteristics start becoming more apparent. In fact, if they don't desynch to some degree during puberty, they're likely to come across as a little too close.

Also note that due to the androgynous features of this trope, such twins will traditionally be depicted as Ambiguous Gender, playing Dude Looks Like a Lady, Bishōnen and Wholesome Crossdresser for the brother, and Genki Girl, Tomboy-type Tsundere for the sister. For this reason, this trope is also very common in stories with Transgender Fetishization and Otokonoko Genre or Sweet on Polly Oliver, where it serves as a standard explanation for the protagonist's femininity or the reason for his forced dressing up. On a less fetishistic note, one twin being trans can be used as a plausible explanation for this trope. In this case, the twins look the same because they're genetically identical, but their gender identity is different, and one twin has transitioned to better reflect that identity.

In Real Life, this would fall under Strong Family Resemblance, as any set of fraternal twins, opposite sex or otherwise, are no more or less likely to resemble each other than normal brothers and sisters, other than being the same age.

Compare to the rare real-life phenomenon of semi-identical twins

, where the twins have identical genes from their mother and different genes from their father, and thus can be the same sex or opposite sexes. This could lead to an Uncanny Family Resemblance if the sperm are similar enough.

This trope is perhaps the most glaring example of Always Identical Twins.