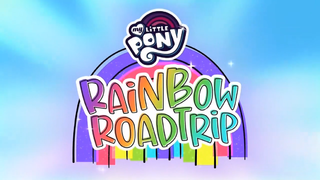 Rainbow Dash gets a letter inviting her to the Rainbow Festival at Hope Hollow as the guest of honor, inviting her friends along as well. After some initial troubles taking off, the Mane Six leave in a hot-air balloon for the distant town, all imagining the activities they'll enjoy when they get there. However, as night falls and they near where the town is, there's no apparent sign of it, except for a giant wooden rainbow which they crash into. They safely make it to the ground but the balloon is in need of major repairs. They find a sign pointing to Hope Hollow, so they know they are close.

They soon find the town but nopony around, and with much of the place lacking color. They find the inn they were to stay at, run by Petunia Petals, who is happy to greet and lodge them, and tells them they can see Mayor Sunny Skies the next day. When morning comes, they find that ponies are about, but like the town, appear washed-out of color, and the Mane Six's own bright coats make them stand out. Sunny Skies comes to greet them, and shows them that their local repairpony, Torque Wrench, is already working on fixing the balloon. They ask about the Rainbow Festival, and Sunny tries to show them to the non-existent exhibits but is forced to tell them that there is no Festival. There had been a Festival in the past, something his grandfather had started using a special Rainbow Generator that helped with the celebration. The Generator was passed down through Sunny's father to him, keeping up the Festival tradition. However, in recent years, Sunny found the ponies of Hope Hollow has started to participate less in the Festival, and to try to liven it up, modified the Rainbow Generator with his magic. However, on activating it, the Generator failed, and the town and all the ponies were drained of their colors. Since then, Sunny has blamed himself for the accident and had invited Rainbow Dash to try to help fix it.

The Mane Six quickly agree to help, believing that by holding the Rainbow Festival, along with magic from Twilight, they can restore the town's colors. The Mane Six split off:

Unseen by any of the ponies, those small acts of happiness and sharing reverse the color loss on a few objects.

Twilight decides that a way to reverse the color loss is by fixing up the Generator and then using her magic to help. With AJ's and Torque's help, they repair the Generator, and while the Generator works, Twilight's magic fails to make any change. Twilight is about to walk off when AJ notices a set of flowers that had regained their color after Torque received her compliment for her repair work. Seeing that the colors can be restored on their own, Twilight proves to Sunny that the loss of the town's color wasn't from the Generator, but simply from hopelessness magic, an effect that comes when ponies were not showing community with each other and lost hope. His photos were out of order, seemingly putting him at fault, but the effect had already set in even before he turned on the Generator.

Knowing that bringing the community together will fix the colors, Twilight and the others get the support of their new allies to set up the Rainbow Festival as it was planned. With the excitement of the Festival, the town and its ponies gradually get their colors back. As Sunny starts off the Festival, he reveals to Petunia a secret project he had been working on - a marriage proposal, as she has been supportive of him all this time since he doubted himself. As the Festival commences and Hope Hollow returns to normal, the Mane Six say their goodbyes to their new friends and take off for home.