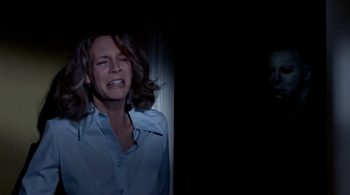 The Half-Empty Two-Shot is a narrative framing technique usually found in horror and suspense films/shows, in which a shot of one character is composed asymmetrically, as if the character is in a two-shot with an invisible second character. It creates narrative tension by making the viewer expect someone (or some thing) to lunge into frame and balance the composition. In this context, it is also known as the "Bogeyman Shot" (thanks, Roger Ebert).

It's also sometimes used in melancholy contexts: the person that should be in the other side of the frame isn't there because he's dead, or missing, often with an empty chair or a deep impression left in a bed filling in.