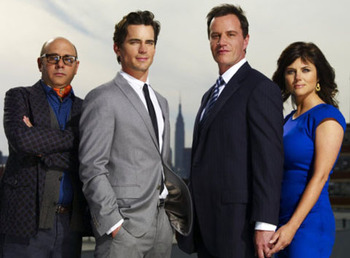 White Collar is a drama by USA Network about a white collar Gentleman Thief, Neal Caffrey (Matt Bomer), and Peter Burke (Tim DeKay), the FBI Agent supervising him who work together, albeit begrudgingly, to stop white collar criminals.

Caffrey is a convicted Con Artist, having broken out of jail three months before his sentence of four years was completed. He's quickly caught by Burke (who was responsible for catching him in the first place) and is in for another four year stay, but manages to be released to the FBI (Under Burke's supervision and being tagged with a GPS-tracking anklet) to assist with catching some of the most ruthless white collar criminals in New York City, which also gives him an opportunity to pursue his lost girlfriend, Kate (Alexandra Daddario), on the side.