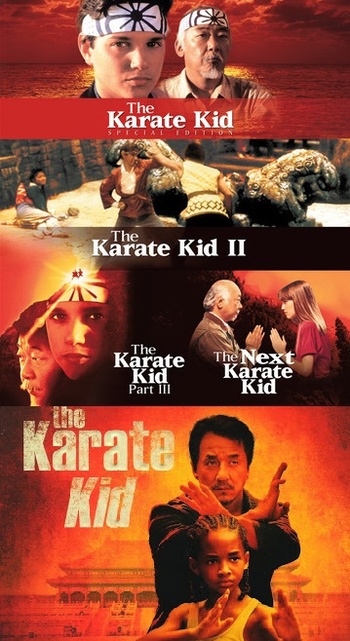 A series of five films beginning in 1984, the movies can be broken into distinct eras.

First is the LaRusso trilogy, which focused on a student-master relationship between Daniel LaRusso (Ralph Macchio) and Mr. Nariyoshi Miyagi (Pat Morita). The name "Miyagi" came to be slang for a type of Retired Badass.

Next was a Soft Reboot, which featured Hilary Swank as Julie Pierce, another teenager that needs help learning self-discipline from mastering Karate, is also trained by Mr Miyagi, and a monastery of additional martial artists. Miyagi was the only continuity between the two films, although he does make several references to the previous trilogy.

In the meantime, there was the animated series. Given that Miyagi and Daniel travelled the world in search of a magical shrine, it's safe to say that it's only tangentially related to the main series.

The next film, from 2010, was a Hard Reboot, and focused on the student-master relationship between Andre "Dre" Parker (played by Jaden Smith) and Mr Han (played by Jackie Chan). Instead of making the student do chores, Mr Han does the same sort of Trickster Mentor approach and teaches Dre how to become a better son. Oh, and, due to Mr Han being Chinese, Kung Fu is practiced in it instead of Karate.

Following the 2010 movie, the franchise went with an Un-Reboot series called Cobra Kai following Karate Kid antagonist Johnny Lawrence and Daniel 34 years after the first movie. Both Ralph Macchio and William Zabka reprise their roles, and the series debuted on YouTube Premium before undergoing a Channel Hop to Netflix starting with the third season.

Many people have noticed that DC Comics is credited in the films, but contrary to popular belief, the films are not directly based on any comic book. Columbia Pictures obtained permission from DC (as a professional courtesy) to use the title "The Karate Kid" because the name was already in use for the Karate Kid in DC's Legion of Super-Heroes comic, but the films draw no inspiration from the character otherwise.

Installments in the franchise (by year of first release):

This film franchise has examples of:

Tommy famously said in Karate Kid that Daniel would need a body bag after facing Johnny. Decades later, his return for Cobra Kai ends with him in one (reflecting the real-life terminal cancer of the actor, Rob Garrison).

Tommy famously said in Karate Kid that Daniel would need a body bag after facing Johnny. Decades later, his return for Cobra Kai ends with him in one (reflecting the real-life terminal cancer of the actor, Rob Garrison).