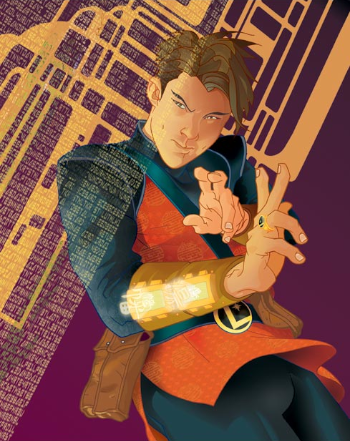 Post-Zero Hour: Crisis in Time! Val
Some of us enjoy getting our hands dirty.
— Val Armorr, Legion of Super-Heroes Vol 5 #2
Advertisement:

Val Armorr is "Karate Kid", the only Legion of Super-Heroes member without a true superpower. He is a DC Comics character created by Jim Shooter who made his first appearance in the pages of Adventure Comics in 1966.

The best martial artist in the DCU hands down, Val Armorr has become so skilled at martial arts that it's a Charles Atlas Superpower. He was given a spot on the Legion despite his seeming lack of powers when he proved capable of defeating foes with super-strength and durability with martial arts alone. His temperament has varied across reboots, but he was originally headstrong and abrasive, making it difficult for many of his teammates to get along with him, and he is always incredibly strong willed and confident with good reason.

In 1976 Karate Kid got his own series which lasted for fifteen issues.

For the unrelated film franchise that began in 1984 see The Karate Kid.

Karate Kid from the Legion of Super-Heroes comes smashing into our time!