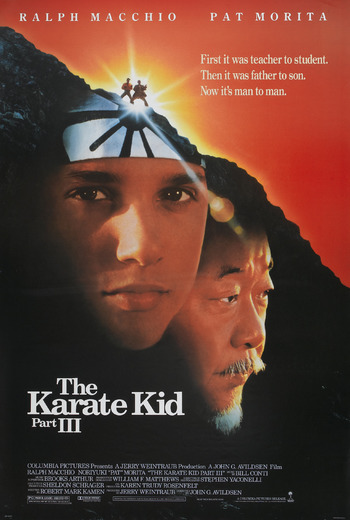 "Inside you have strong root. No need nothing except what inside you to grow."
Kreese: What about the old man?
Silver: Him I hurt through the kid. Johnny, by the time that little twerp steps into the ring to defend his title, I'm going to have him thinking he's invincible. And then he's going to find out what pain and fear really mean.
Advertisement:

The third movie in The Karate Kid series, released in 1989.

One year after the first film, John Kreese has fallen on hard times after his humiliation at the 1984 All-Valley karate tournament. He orchestrates a plan with an old war buddy of his, Terry Silver, to revive the Cobra-Kai dojo by targeting both Daniel LaRusso and Mr. Miyagi. With Kreese remaining in the shadows, Silver manipulates Daniel into returning to the All-Valley tournament, setting him up to be humiliated by a new unstoppable combatant, Mike "Dynamite" Barnes.

"Daniel-san, your best karate is still inside you. Now time let out!"